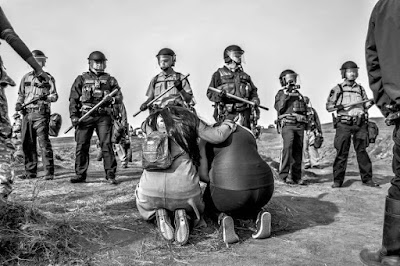 When they arrived to Morton County Jail, they were stripped to one layer of clothing and left in cement floored chain link kennels without blankets for hours. At no point were they read their rights. They were denied a phone call even to their attorney.

Protectors were required to give DNA samples to police.

One Water Protector described seeing a person repeatedly re-injured by their pepper sprayed clothing because they were not allowed to change.

After several hours, they were separated and sent to different jurisdictions, some as far as Cass County – four hours away.

Some Water Protectors were then subjected to another strip search. Each county handled strip searches differently, but in all cases of a second strip search, the detained Protectors were required to remove all of their clothing, bend over or squat, and cough. Searches took place in bathrooms or cells in front of male and female guards.

Booking on charges took up to four days.

Arrests before the raid had similar experiences.

“It was dehumanizing,” said Protector Richard Black Crow Smith, who was subjected to conditions in the Morton County Jail.

Water Protectors on horseback, called Spirit Riders, described being shot multiple times with rubber bullets as they tried to get away from helicopters chasing them and flying 15 feet over their heads.

Aircraft surveillance and behavior over the Water Protector’s camps was also a subject of investigation. Low flying planes or helicopters circle over the camps all day and night.

Grand Chief Akile Ch'oh Edward John said after his interviews, “Individuals detained under highly questionable conditions, highly illegal in fact, with no access to council. I am shocked at what I have heard from those who I have spoken with today. The lack of attention to this issue here is astounding.”

Morton County Sheriff’s Office opened the jail to the United Nations investigators. Investigators were able to confirm many of the claims of Water Protectors including the chain link cells.